What side do you fall on? Liberal or conservative? Democrat or Republican? Uptight or laid back? Scholar or player? NFL, NHL, MLB (NL or AL) or NASCAR? Introvert or extrovert? Good or bad? Or really good at being bad? Or really bad at being good? Six more or half of another dozen? These "minuet" differences can cause wars... serious! LOL

But God... Who is a loving father with many children, sons and daughters in all of these categories or "labels" if you prefer. I don't like labels, never have. I guess because I've experienced being labeled and the rejection that goes with it

Recently a couple different family members apologized for calling me a christian and right winged, different peeps, different conversations. I came away from both interactions, head cocked sideways, wondering why the apology?

When I was younger, way younger, I'd figure out what everyone else wanted and met the expectation best I could. The people I couldn't figure out, I'd stay away from. I was starved for attention and rather jolly. It was all a cover for the deep pain that was my constant companion.

I guess it was a survival mechanism. If I kept busy being who people wanted me to be, I wouldn't have to deal with who I really was. But the clock was ticking.

Little did I know that a tiny little 7 pound, 3 ounce baby was about to turn my entire life upside down. Up until I got "accidentally" pregnant, I was a mover and a shaker by all counts. I excelled at work, college and relationships. Why wouldn't I? I made it my job to be who ever you wanted me to be, so of course  you'd find me pleasant, witty and ready to lend a helping hand.

I only had to worry about myself. I knew I had a high tolerance for bullies and selfish people. I grew up around many of them. I'd joke later on that I was "the bully whisperer". I had a knack at befriending angry people and keeping them calm for awhile. What a job! Eventually I'd learn it was just too hard to keep people happy. Trying to juggle so many different expectations left me exhausted. Unfortunately, the unintended consequences were a pattern of isolation and loneliness. While I missed being around people, it took to much energy to inevitably be disappointed. Can you relate?

What a sad state of affairs.

I'm amazed how some of the worse crimes in humanity occurred between people who were so much alike. Like the Hutu and Tutsi's clans that led to the 1994 genocide.I googled differences between Hutu and Tutsi's and this came up:

Despite the stereotypical variation in appearance - tall Tutsi's, squat Hutu's - anthropologists say they are ethnically indistinguishable. The oft- quoted difference in height is roughly the same as the difference between wealthy and poor Europeans in the last century (an average of 12cm).Nov 16, 1996

And more recently the conflict between the Curds and Wheys... (joke my step dad liked to say). But seriously the middle east has been a boiling pot since Ishmael and Isaac. The two were so much alike they had the same father's blood running through their veins.

But new research shows that the numbers were far too low.

By combing through newly digitized census data from the 19th century, J. David Hacker, a demographic historian from Binghamton University in New York, has recalculated the death toll and increased it by more than 20 percent — to 750,000.

That's a lot of Americans. Were all those lives lost necessary? No. Because the evil view that one human can own another depending on the color of their skin should have been aborted without having to go to war. But the slave owners would not budge. The culture of the south tolerated slavery. Because they wouldn't be reasoned with, war was necessary and everyone of those lives lost was worth the final outcome. An outcome we are still tweaking up to this day.

I believe another American Civil War is on the horizon. If those who hold the view that the Constitution of the United States is pliable and therefore interpreted to mean what ever liberal judges want it to mean instead of defending what the founding fathers meant it to mean, war is coming. Ideology is described on Google as a system of ideas and ideals, especially one which forms the basis of economic or political theory and policy.

Education is loaded with ideology and since they took God and prayer out of the public schools, the Board of Education is doing what is right in their own eyes. Promoting liberal ideology. Indoctrinating the next generation to disregard America, her police and any good in her history.

It was Patrick Henry who said, "Give me liberty or give me death!" on March 23, 1775. For ten years the American colonies had been over taxed, under represented, homes invaded without reason, their firearms confiscated and more. The leaders tried to remain loyal to the English Crown and reconcile but finally had to break away in revolt.

We are on track for the same tyranny and I'd say with COVID19 rhetoric, we are willingly submitting to losing all our freedoms and liberty's. Once they're gone, the power hungry politicians are not going to easily give it back. So many unconstitutional orders are keeping us on house arrest. Many entrepreneurs have lost their small businesses. It didn't have to be this way. Many businesses could have survived a 2 week shut down but not 8 weeks which we are quickly approaching.

Switzerland did not go on lock down. They have the same population as Michigan.  To this date Switzerland has 30,344 cases with 1,543 deaths compared to Michigan's 47,138 and 4,551 deaths. A recent New York City study found that 60% of new COVID19 cases were people who were sequestered. They were not out in public!

The economic devastation purposely done by the government does not have the statistics to support it. Is the following the real reason for extended shutdowns? 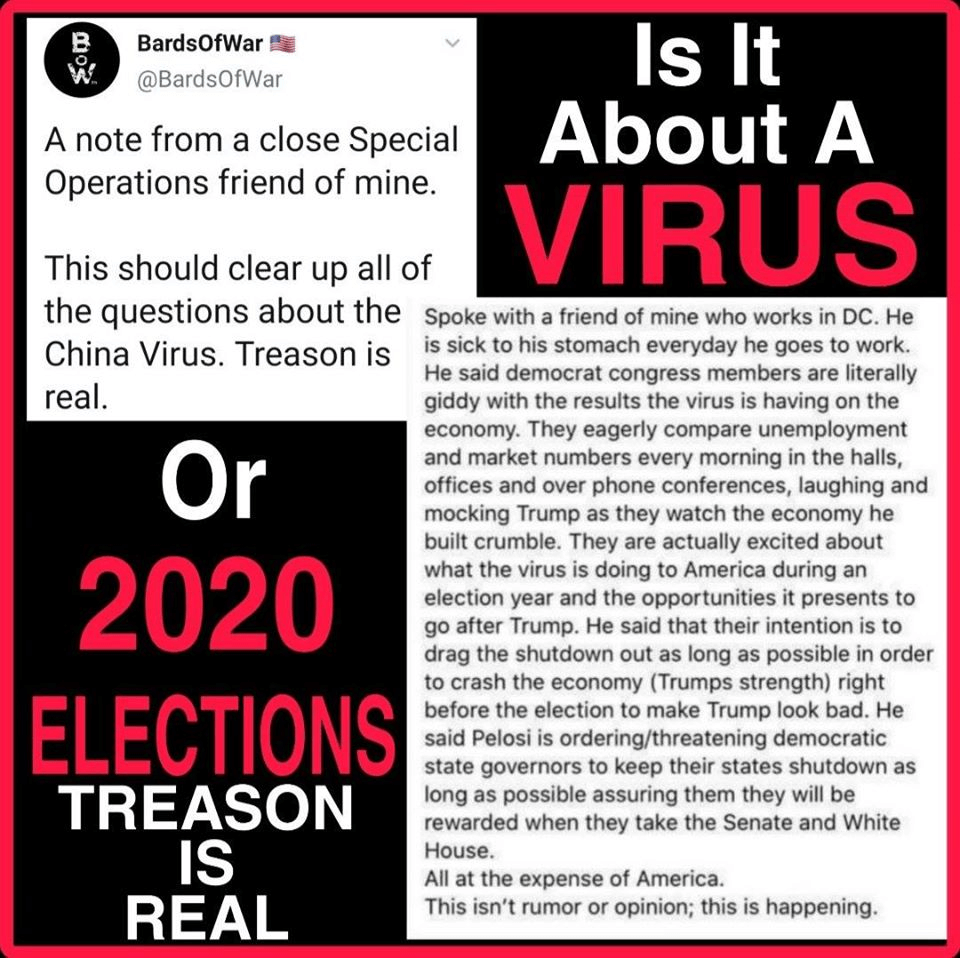 How important is your ideology? Are you willing to destroy people for it? Are you willing to risk your life to promote it? Would you be willing to let others suffer so you can get your way? What if you're one of many? Your side is acting out a mob mentality and if you don't tow the line, will they turn on you?

I find people who don't claim any religious faith, except Darwinism to be especially angry and ready to fight for their side. Faithful people, except for the legalistic ones seem to quote the story about Jesus turning the other cheek for their lack of response.

It got me thinking. Out of the many parables in the Bible, there's one in particular that leaves the conflict unresolved. It doesn't even record the conversation that had to have occurred at some point in the near future. Maybe this parable of the lost son, as told by Luke in Chapter 15 starting in verse 15, only regards the relationships from the father's perspective and his love for his different sons because the two sons were complete 180* bi-polar opposites. Although brothers, their differences made them enemies. No one else in the world was as biologically similar as these two men but pride and hatred was showing up the mess that foolish selfishness created.

In case you're not familiar with the story, in a nut shell, the younger brother demands his inheritance before his father dies and leaves to squander all of it.  The older brother stays with the father and the family business, working day in and out to make sure the family's provided for. The younger comes back destitute, starving and sorry for what he's done. The father rewards his return with a party and sends someone to get the older brother to come. The older brother is furious and refuses to come to the party. The Bible leaves the conflict between the sons undocumented. But oh for the fathers joy if the two could have come into forgiveness and relationship again.

Have you ever loved someone enough to do what ever it would take to make them happy? I don't mean in a codependent dysfunctional way either. I mean have you selflessly put what you wanted on the back burner for the benefit of another? I'm sure a loving parent knows what I mean.

If we could back the bus up from our differences for "Father God's" sake, would we? I believe we have that choice in front of us right now. I know God wants us to get along and be in loving relationship with each other. It says in Matthew 5: 23 - 24 if you know your brother has something against you, go and be reconciled before offering your gift to God.

God prefers we come to him with pure hearts more than us giving him our money.

And other points of wisdom say it's better to have salad with a friend then steak with an enemy.

God knows a house divided will not stand. We will not have full access to his blessings when we're in turmoil or strife with one another. So why don't we do our best to find a way to agree too disagree? Get rid of the mob mentality, treat one another the way we want to be treated? You know The Golden Rule.

Until we meet again, live long and prosper!

#differences #war #shutdown
Dear Woman, Why Are You Weeping?
COVID19 Ain't Got Nuttin On Me Boo!
Happy Father's Day To The Invisible Man
Comments